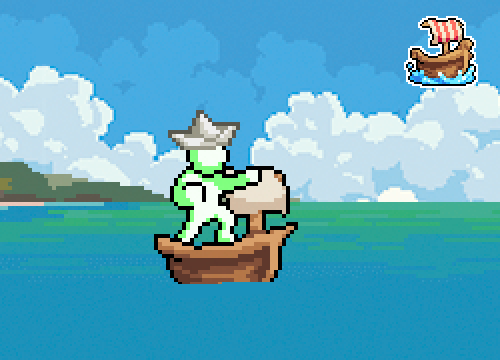 Take to the high seas to discover lost islands, treasures, and ancient artifacts. Buy Upgradable ships and Captains to man them with their own individual talents and skills.

Each slot takes an amount of

to unlock as shown below

Captains can be bought from the pedestals on the right which restock with new Captains over time. There are 4 pedestals with the first one unlocked initially and the others unlocking at Sailing Level 12, 25, and 35 respectively.

A captain will be one of several Tiers of capability, and each comes with their own sprite.

Each Captain can have various bonuses and can be leveled up by sending them out to islands.

In order to purchase a Captain you have to own an open Captain slot.

Ships are Unlocked in a similar way to Captain Slots are, but unlike Captains, Ships have 4 attributes to them: Ship Level, Loot Value, Speed, and Artifact Odds. Of those Loot Value and Speed are directly upgraded with Sailing Treasures.

A ship's level is determined by the combination of it's Loot Value and Speed upgrades. It will increase in tier, and recieve a new look, after reaching certain levels as shown below.

When a ship returns from an island it will be carrying a chest with loot from the island it came from. There are 6 tiers of chests.

To begin sailing you have to select an empty Ship and then an idle Captain to asign the Captain to it. After that you interact with the Sailing map and within the "Map" tab you can drag your active Ship to an unlocked island or nearby Cloud to begin Sailing. Each island will produce various Sailing Treasures, have possible Artifacts to collect, and grant experience to your Captains (and consequentially to you). Before you can access an Island you have to reveal it by traveling to the Clouds that cover it.

Note: Lava has requested we don't share beyond the 10th Sailing Treasure so you'll just have to make do until that changes.

Artifacts can be gained randomly from Sailing Expeditions when opening up Chests (Chest Rarity affects this). Each Artifact gives powerful bonuses and has an Ancient version that can also be gained that provides an additional effect!